FREE SHIPPING ON ALL ORDERS OVER $750! 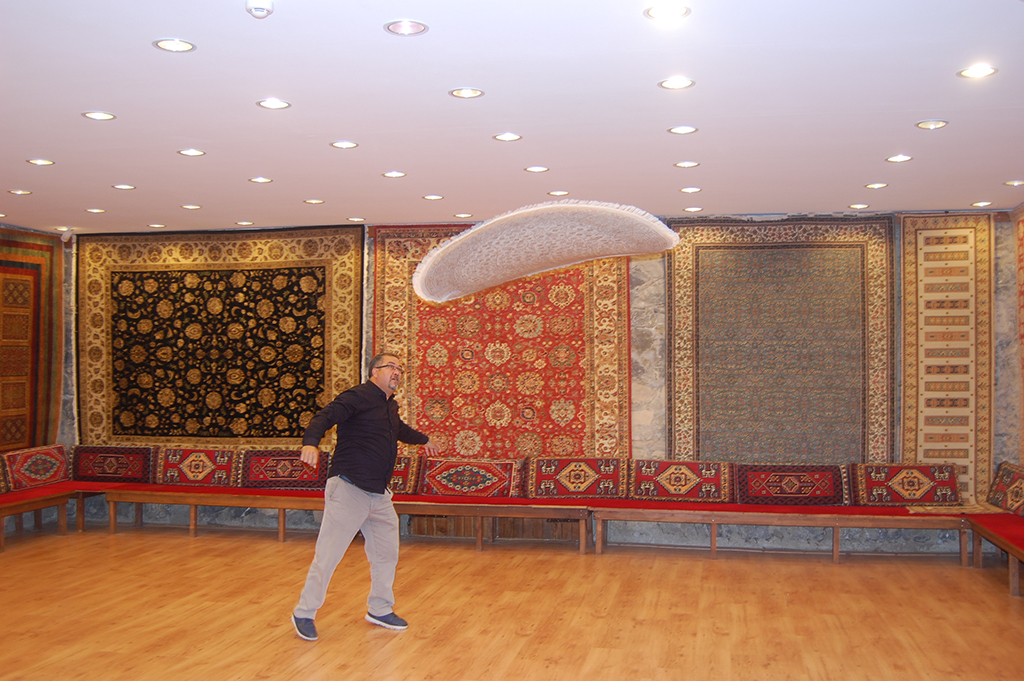 Therefore it was no surprise to my friends, that when we were out and about for the day, I dragged them into a Turkish carpet and rug shop.  It was the same shop that I had bought some carpets from four years ago and the sales man still remembered me. ( Turkish people never forget a face).

About Turkish Carpets and Rugs

The salesman proceeded to put on a show for me, and all the carpets and rugs came rolling out one by one.  If ever you struggle to learn the Turkish culture, then just nip into a Turkish carpet shop as each carpet or rug comes from a specific area in Turkey and the symbols and motifs on the carpet all mean something.   Some carpets take a couple of months to complete, others have taken 13 years. The process begins with collecting the wool or silk, then dying it. After the material is ready, the women will begin to make the carpet on a weaving loom.

I was specifically looking for a carpet for my hallway, so this helped the salesman to narrow down the choice.  The first of the Turkish carpets that he showed me was one that came from the Torros  mountains in Antalya. It was made from sheep’s wool and  would set me back 800TL, however the salesman had seen my delight and suggested that we open up the bartering process. Bartering over traditional carpets and rugs in Turkey is expected so you should never accept the first price that you are given.

This symbol is of the Christian cross.

I was not quite ready to open up the bartering process. Never barter with a salesman if you do not truly want the product. As the salesman had seen I was not ready, he continued rolling out carpet after carpet, while we all sat there and enjoyed the show. More often the not, sounds of ooooo were heard coming from our direction.

The five dots on this carpet refer to the five calls to prey, a day by the mosque.

Eventually, the salesman hit upon a winner with a Usak carpet. It was in the striking colors of cream and red and felt like heaven when you walked on it. The design was referring to a Tulip Garden and it measured 295 x 84 cm. This carpet had truly captured my attention and once again the salesman tried to open up the bartering process. This Turkish carpet was twice the price of the first one I had seen and whilst I could barter to get a lower price, I would still be taking money from my traveling fund. ( Currently saving for a trip to Cappadocia)

The carpet of my dreams. An Usak carpet

I was not that sure if I wanted to dip into my traveling fund so decided not to start bartering. I took the salesman’s telephone number though and promised to get back to him with an answer of either yes or no.  It was at this point that the salesman decided to really try and surprise us with a pure silk prey carpet that would cost around 2000TL.